Chinese Chive Pocket (Simplified Chinese: 韭菜盒子; Traditional Chinese: 韭菜盒子; Pinyin: Jiǔcài hézi;), The Chinese chive pie is a traditional snakes popular among the northern and northwestern china regions such as Shandong, Henan, Heibei and Shanxi. It is also made for festival in some places. This pie is commonly offered in restaurants in northern China. Normally there are 2 types of Chinese chive pie: chive stuffing only and chive and meat stuffing. 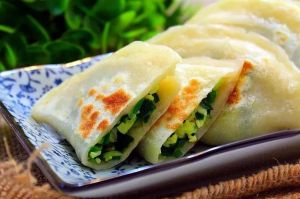 Chinese Chive Pocket (Jiucai Hezi 韭菜盒子) is estimated to be 193 kcal per 100 grams of calories.

In some places, for example, Tianjin, the chive pie is served on the 3rd day of Chinese New Year, which goes with the old saying “The first day serve dumpling (Jiaozi), the second day serve noodles and the third day serve chive pie. 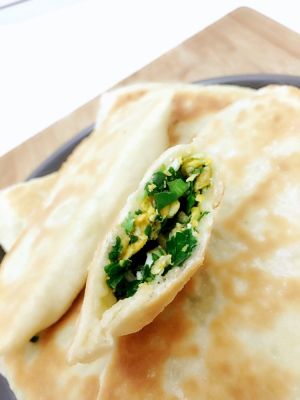 Measure out the flour into a large bowl and pour some water (better use warm water for the dough will be softer). Mixing up the flour until they come together and the surface is smooth. Once you prepare the dough, cover it with foil and put it aside for 20 minutes.

Mince the chive and fry the egg and put them together in a bowl. Add oil and salt and mix up.

2. Put some flour under the chopped dough to avoid them sticking to the board.

3. Roll the dough pieces into 10 round dough skin

5. Fold the skin into a half moon.

6. Fry them until they turn brown in each side and they are ready to be served!