What is Chop Suey 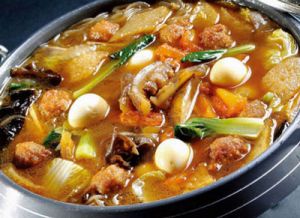 Lee Hung-Chang Chop Suey rocketed to fame and became a runaway success in the United States. This is the origin of this dish. It is said that some Chinese cooks came to the United States during the Great Gold Rush to provide food for miners and sell this dish to the drunken American miners.

There are two story versions circulating between China and the United States.

In 1896, Lee Hung-Chang took the opportunity of attending the coronation ceremony of Russian Emperor Nicholas II to travel around Europe and the United States. During this period, he invited American guests for meals. In order to reconcile the tastes of Chinese and foreign guests, the chef made bold innovations to mix celery, bean sprouts with cured meat, which went popular among the Americans. Besides profuse praise, the Americans also asked Lee Hung-Chang about the name of this dish. Lee answered casually, “Chop suey”.

After he arrived in New York, he banqueted American guests on the evening of August 29th, attempting to establish fine Sino-US relationship. He knew that there was a known saying in the United States: “The way to a man's heart is always through his stomach”. During the banquet, Lee Hung-Chang served a dish made of celery, bean sprouts, meat and delicious Chinese sauce to satisfy the dual tastes of Chinese hosts and American guests. 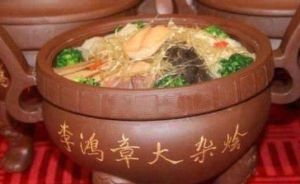 Put all the slices, pigeon eggs, white chicken, pork belly slices, cooked ham (40g), scallop balls, and water-borne mushrooms into the pot, and then add the raw sauce of steamed scallops and seasoning until all the flavors mix well.

Take a large bowl, pick out water-borne mushrooms from the mixture and put them onto the bowl bottom, place the pigeon eggs around the mushrooms, then spread the other materials in terms of their color, neatly arrange them into the bowl, and finally dump all the crushed materials and steam for 5 minutes. Decant the raw soup into the pot, upend it into the large circular disk, put the cake ring (4 cm in diameter and 1 cm in width) on the mushrooms while the shredded ham and chicken in the yolk ring, boil and thicken the raw soup and pour some lard stearin (10g) over the hotchpotch, put the salted duck egg yolk on the top, and insert spinach stems under the egg yolk.