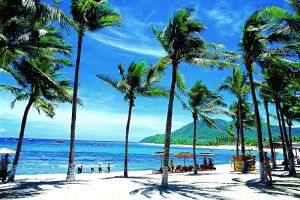 Hainan cuisine, or Hainanese cuisine, is derived from the cooking styles of the peoples of Hainan Province in China. The food is lighter, less oily, and more mildly seasoned than that of the Chinese mainland. Seafood predominates the menu, as prawn, crab, and freshwater and ocean fish are widely available.

Congee, mantou and baozi are eaten for breakfast, with a noodle dish also being widely eaten. This consists of fine, vermicelli-type noodles with various toppings and gravy. Along with lunch and dinner, late night outdoor barbecue dishes are also served.

After more than two thousand years of development, Hainan cuisine not only has the cooking methods of Fujian and Guangdong coastal provinces, but also absorbs the food culture of Li, Miao people and local aborigines, and introduces specialties from Southeast Asia and other places. Hainan relies on its unique nature. The resource advantage is rich in many rare and rare sea treasures. In Hainan, you can enjoy the taste of fresh seafood and original taste.

One of the four most famous dishes in Hainan is Dongshan Lamb or Mutton. Originally from Wanning, Hainan, this dish isn't the standard type of mutton. It doesn't have the typical mutton taste because it can be stewed, roasted or braised in coconut milk. It is very tender and soft and often comes with a thick soup for a full dish.

The Jiaji Ducks are raised along the Wanquan River in Jiaji Town, Qionghai City. As they grows, this special breed is kept in coops and fed with rice, grain, sweet potato, and chaff. The meat is thick, the skin is thin, the bone is soft and there is very little fat. The cooking way of Jiaji Duck is also particular. The traditional way to prepare which it is to boil it in water, dice it, then eat with mixture of vinegar, chopped ginger and sesame oil.

Hele Crab originated from Hele Town, near Wanning, located on the southeastern shores of Hainan. The yellow meat of the crab has an oily texture, and a strong aroma. Hele Crab tastes best if steamed and accompanied with ginger together with vinegar. It maintains the original taste of the crab and tastes especially fresh and delicate. It is best eaten in autumn.

The Wenchang Chicken is so named because it was first produced in Wenchang City. The chicken is free-range and on a high protein diet. The most traditional way to prepare Wenchang Chicken is "white cutting", which involves immersing the chicken in almost boiling hot water and cooked to preserve its softness and tenderness. It is then eaten by dipping the pieces in a mixture of spices including ginger and salt. All star-rated hotels and the major Hainan style restaurants can serve this dish.

Like most regional cuisines in China, Hainan has its own variation on the classic, shareable meal, mostly focussed on its fresh seafood. In Sanya, fresh seafood is available all year round so this dish can be enjoyed in the summer or winter. The pot is relatively small as far as hot pots go. A typical seafood hotpot includes an assortment of seafood such as nutritious fish head, prawns, clams, crab, as well as plates of green vegetables for dipping in the pale soup bases.

Since lobsters live in shallow waters of tropical areas, you can get some pretty awesome fresh lobster right off the coast of Sanya. In Hainan, people eat the lobster raw with mustard or they fry them in oil. The meat is fresh, slippery and soft. Depending on the type of lobster you get (there are a few different types in Hainan), the lobsters claws maybe be big or small.

Turtle and Snake Soup is special to Hainan and has been used as a Traditional Chinese Medicine to prolong life in ancient China. Thanks to Hainan's temperate climate, lots of snakes and turtles live near Sanya. Because of the believed health properties associated with eating snake, lots of traditional Hainan restaurants serve this soup.

If you weren't aware yet, noodles are a very popular breakfast staple for lots of regional Chinese cuisines. Originally, this dish was created in northern Hainan in Haikou, and was loved by urban residents of the island, but later spread to the rest of the cities. In Hainan, the noodles are made from rice flour and are usually topped with meat sauce, roasted peanuts and strips of bamboo.

The Wanquan River in Hainan is home to four different types of a fish called Cyprinoid, which is a type of freshwater fish including carps and suckers. In Hainan, these fish are aplenty in the Wanquan River and you can get them fresh in most parts of the island. The fish is typically poached, steamed or eaten in hot pot then covered liberally in sweet and sour sauce. The fish is rich in essential nutrients and delicious. 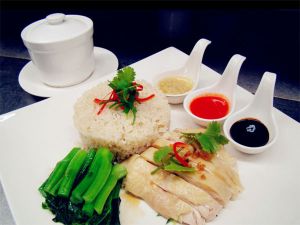 Hainanese Chicken Rice is probably more well known in Singapore and Malaysia than the namesake of the dish, Hainan. This dish is actually based on another dish on this list, Wenchang Chicken, but with a little twist. The entire chicken is poached in traditional Hainanese style. The stock from boiling the chicken is used in cooking the rice to make it oily. The chicken's skin is jelly-like from being dipped in ice after it's finished boiling. It comes with a dipping sauce, usually red chili with garlic and soy sauce.[2]

Calamansi is a popular local citrus fruit that was created years ago by crossing mandarin oranges and kumquats. Tart and flavoursome, it goes brilliantly with black or green tea, and either combination can be found at stalls all over Hainan.

If it’s hot make sure you try one of the island’s most delicious sweet treats: Hainan mango roll. Fresh slices of mango are wrapped in diaphanous rolls of rice paper and topped with mango sauce. Each one is a little work of art on a plate.

Or if it’s really hot try fried ice: fruits of your choice – the local mango is amazing – blended with condensed milk and then flash-frozen into sweet and creamy sorbets. They’re an instant hit with children.[3] 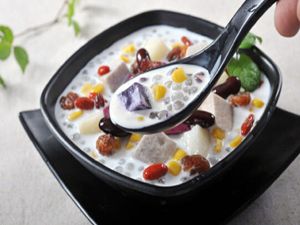 In addition to an abundance of fresh tropical fruit, you can find various desserts in Haikou from ice creams, creamy puddings to fruity smoothies. Despite it seemingly random list of ingredients you must try qingbuliang, a cool local sweet and cold dessert soup served in a glass bowl. This tropical snack which varies slightly from town to town contains chilled coconut milk with ice, watermelon, pineapple, raisins, sweet potatoes, peas, macaroni and jujube. Chaobing, literally means "fried ice" and is a freshly made sorbet-like dessert. You choose the fresh tropical fruit which is then blended, strained, and then poured into a special device that freezes the mixture on contact. Due to extreme low temps the chilling process produces a very fine ice crystal that results in a super smooth sorbet. 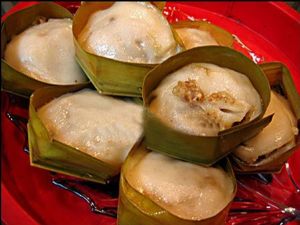 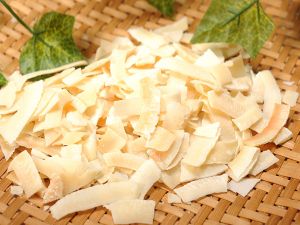 Use of rice and coconut highlights many of Hainan's snacks. Haikou people are used to eating rice noodles for breakfast. In Haikou, you will find sticky rice pair well with coconut in many delightful chewy snacks, for example, yezifan (sticky rice in coconut) and yibua (glutinous coconut rice cake wrapped with banana leaf), and dried coconut pieces.[4]
Retrieved from "http://www.chinesefoodwiki.org/index.php?title=Hainan_Food&oldid=10670"
View source