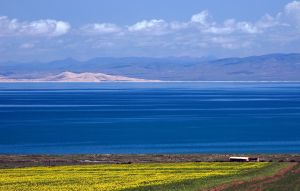 In addition to the eight major cuisines of Sichuan, Shandong, Guangdong, Jiangsu, Zhejiang, Fujian, Anhui and Hunan, there is also a diet system that few people have introduced—Qinghai cuisine.

About 80% of the area of Qinghai Province is grassland, and the rest are agricultural areas and semi-agricultural, semi-pastoral areas in the east of the province. There are such native products as yaks, Tibetan sheep, Gymnocypris przewalskii and Cordyceps sinensis, as well as many wild animals, wild birds, vegetables, melons and fruits. Qinghai cuisine is dominated by Han and Hui flavors in those agricultural areas and semi-agricultural, semi-pastoral areas, the two flavors influence each other with blending recipes of cooking and seasoning, and absorb the cooking characteristics of Tibetan cuisine system in pastoral areas, constituting the main body of Qinghai cuisine. To a certain extent, Qinghai cuisine is more affected by halal food, but there are some differences. Its recipe is featured by the nomadic, carefree style, with beef and mutton and other local specialties as the main ingredients. Qinghai cuisine’s cooking methods include stir-frying, roasting, grilling, steaming, cooking, stewing, etc.. With sour, spicy, mellow, crisp as the taste characteristics, Qinghai cuisine has its unique and abundant diet system of plateau nationalities.

Qinghai is a place where many nationalities gather, so there are a variety of dishes and snacks with different flavors. Qinghai cuisine is characterized by mellow, softly crisp, crisp and tender, hot and sour. It contains the mellow taste of northern cuisines, the hot and spicy taste of Sichuan cuisine, and the fresh and sweet taste of southern cuisines. The dishes of ethnic minorities in Qinghai have a naturally carefree beauty, and the main ingredients are beef and mutton.

Tasting delicious, smooth and palatable, nutritious, easy to digest and suitable for all ages.

In Qinghai, the moon cakes are made as the offering to the moon during the Mid-autumn Festival, and it is a good time for women of all ethnic people to show their culinary skills.

Butter Zanba is one of the traditional staple foods of Tibetan herdsmen. "Zanba" is the transliteration of Tibetan cakes made of fried highland barley flour, and it is a daily main food of the Tibetan people.

Ruyi (May you be prosperous) Nostoc 如意发菜