Chuan chuan, meaning something like “skewered food” is a sort of remix of the classic hot pot theme. Unlike traditional hotpot, however, the ingredients of chuan chuan are skewered on sticks and then placed in the boiling oil within a clay or iron pot, making it more convenient to pick up the food after it is cooked in the pot. 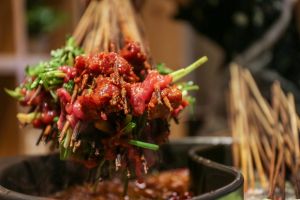 The local in Chongqing come to that kind of Chuan Chuan Restaurant from all districts to satisfy their taste buds but not for novelty or following. Variety of dishes and unique taste impress visitors and keep them coming back for more. Many restaurants locate downstairs of an old residential building or in the labyrinthine laneways, always thronged with crowds inside and lines outside when visiting or just passing by every time.[1]

Chuan Chuan Xiang (串串香) is estimated to be 68 kcal per 100 grams of calories..

Chuan Chuan Xiang originated in Chengdu, Sichuan. It is not only one of the traditional snacks in Sichuan, but also the most popular embodiment of grassroots. Strings of incense is actually another form of hot pot, so people often call it a small hot pot.

The origin of the name “Chuan Chuan Xiang” is because this is a kind of snack that is served on a bamboo skewer and put it in a hot pot. The string of fragrant incense is spread all over the country with its unique charm and distinctive features. “Malatang” is also a variant. It can be said that as long as there is a place where there is a string of incense, even to a certain extent, string of incense has become a Sichuan flavor. One of the representatives.

"Chuanchuan" first appeared in the mid-eighties, some towns unemployed people in Chengdu to make a living in some of the popular places such as nearby shopping malls, theaters, video halls and other business stall "Chuanchuan." Tofu with bamboo string, rabbit waist, the halogen pot boiled, dipped in spicy sauce, everyone thinks this food is very delicious. 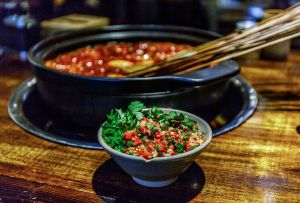 1. Put the butter into the wok and heat it. Put 15 grams of pepper, 25 grams of dried chili, ginger and garlic. Then add the hot pot and stir fry. Pour the rice wine and stir fry.

2, the rest of the material and the old soup into the simmer, roll and cook your favorite food with a hot pot flavor dish.