Mao Xue Wang (Simplified Chinese: 毛血旺; Traditional Chinese: 毛血旺; Pinyin: Máo xuè wàng;) uses duck blood as the main ingredient, cooking skills are based on boil. The taste is spicy. It originated in Chongqing and is popular in Chongqing and Southwest China. It is a famous traditional dish. While eating, boil duck blood or pig blood, and the raw material is tripe and pork slices, hence the name. 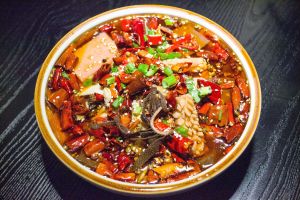 Maoxuewang is a special dish of Chongqing City and it is also one of the originators of the Chongqing dishes. The traditional Mao Xue Wang has improved and innovated the spicy.

The characteristics of its soup are bright red, spicy and delicious, and the taste is thick.

Mao Xue Wang is estimated to be 85 kcal per 100 grams of calories. 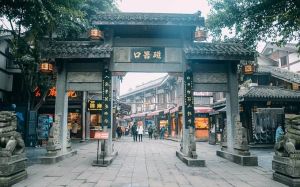 In the 1940s, there are a surnamed Wang who had to sell the remaining chopped meat every day at a low price in the Ciqikou ancient town in the Shapingba District of Chongqing Municipality. Wang’s wife named Zhang, feels a pity, so she sells a stall of miscellaneous soup in the street, put pork head, pork bones, ginger, pepper and cooking wine were simmered on a small fire, then peas were added to make soup. Pork lung leaves and fat sausage were added to make the soup tasty. In an accidental opportunity, Zhang put the fresh pig blood directly into the miscellaneous soup, and found that the blood was cooked more tenderly and tasted fresher. Boil fresh duck blood or pig blood to eat then named Mao Xue Wang. "Mao" is Chongqing dialect, which means rough and sloppy. And the main ingredients are tripe and other tripes as the main material.

Cut the main ingredients into slices, then add them to the boiled red soup, boil them and put them into a container, sprinkle them with chopped green onion. 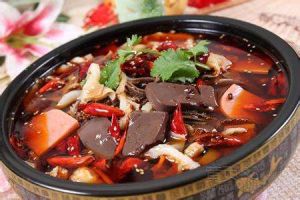 Pork is rich in high-quality protein and essential fatty acids.

Soybean sprouts are rich in vitamins

When eating this dish, we should pay attention to excessive hot and spicy scald, which can damage oral and gastric mucosa, causing congestion and edema. Long-term stimulation may also induce esophageal and gastric cancer.