Sichuan Hot Pot (Simplified Chinese: 四川火锅 or 成都火锅; Traditional Chinese: 四川火鍋 or 成都火鍋; Pinyin: Sìchuān huǒguō or chéngdū huǒguō;) is famous for its peppery, spicy, fresh and fragrant flavor. It originated from the folk and sublimed in the imperial court. Whether ordinary or distinguished, male or female, young or old, its consumer group covers a wide range and the per capita consumption frequency is large, which is beyond the reach of others. As a kind of food, hotpot has become the representative food in Sichuan and Chongqing. Chongqing Hot Pot is also popular in local. 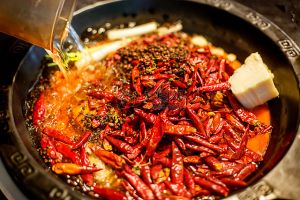 Sichuan Hot Pot or Chengdu Hot Pot is estimated to be 116 kcal per 100 grams of calories.

Sichuan hotpot appeared in the Daoguang period of the Qing Dynasty (1821-1851). After many studies, the real birthplace of Sichuan hotpot is Xiaomitan (now Gaoba No.25 factory) in Luzhou, the city of wine, which is the coast of the Yangtze River. The cooking utensil consisted of only a tile jar, in which water (soup) was contained, various vegetables were added, and hot pepper and Sichuan pepper were added to dispel dampness. 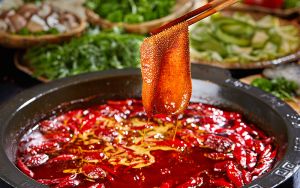 At that time, the boatmen lived by the Yangtze River often spent the night at Xiaomi beach. When the ship stopped, they made a fire to cook and dispel the coldness. After the boatmen finished the meal, the flavor was unspeakable (in their hearts). In this way, it spread from one to ten, ten to hundred, and to all wharfs along the Yangtze River.

In terms of ingredients, it can best represent the typical character of spicy hot in Sichuan. The authentic hotpot with tripe is famous for its thick and heavy oil. The traditional soup is made of spicy bean paste, Yongchuan fermented soya beans, Garze butter and Hanyuan Sichuan pepper. First, boil the butter in a hot pot, chop up the bean paste and pour it in, boil it into red sauce oil, speed up stir frying the Sichuan pepper, mix with the original beef soup, and then add the mashed fermented soya beans and crushed crystal sugar, ginger, Sichuan salt, mash and pepper to boil.

1 can of bone soup

1. Pour salad oil into the pot and heat it up, pour in dried pepper and Sichuan pepper to stir fry for fragrance, fish out for standby, pour sugar into the oil pot and stir fry for dissolving in a small heat, and then put in chopped onion pieces, ginger and garlic.

2. Stir fry the onion and garlic until the color is yellowish, add all the spices and stir fry them together, add the Sichuan bean paste and stir well, and then add the white wine, soy sauce and butter.

3. Finally, pour in the whole pot of spareribs soup, add in the crystal sugar, and then pour the previously fried chili and pepper back into the pot to become the hot pot bottom material.